Maryland’s Move Over Law – A Reminder 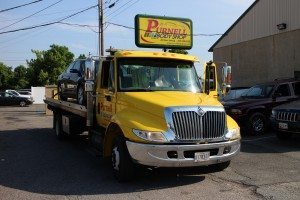 Everybody has something about their job that they would happily do without. However, some folks have aspects to their job that are downright dangerous. Police, fire and emergency personnel are at the risk of danger week in and week out. You only have to ask their families, many of whom say a little prayer for a safe return everyday when a loved one leaves for work. From time to time, lawmakers will pass legislation helping out first responders so that all of us can be made safer.

Such is the case with Maryland’s Move Over Law which, since 2014, requires motorists who are traveling in the same general direction as a stopped emergency vehicle to change lanes. The law stipulates that a stopped emergency vehicle should be flashing its lights, and a stopped emergency vehicle could even be a tow truck. That’s right. Tow trucks stopped assisting motorists are also included in Marlyand’s Move Over Law. This past week a tow truck driver was hit in northeastern Pennsylvania as he was pulled to the side of I-80 assisting a motorist and the driver of the assaulting vehicle drove off. These laws exist in most states for a good reason but details and penalties differ from state to state. Either way, we ask you to look out for first responders and our employees and fellow drivers in the towing community when you are out there on the roadways and be safe when you see flashing lights.

We will be as transparent as possible about what costs you can expect to incur for your repair.

We take collision repair seriously. We are dedicated to delivering the best results on every job.

The pros at Purnell Body Shop are dedicated to ensuring that your car is road ready in every way.

We have the tools, technology, skills and training to repair your aluminum body vehicle.

We are proud to stand behind our work, offering a lifetime warranty on all of our painting services.

We want to bring your car back to perfection without leaving you without a vehicle.